Psychic Reading on Melania and Donald Trump, Hillary, Obama, the feminist movement, the future of America. 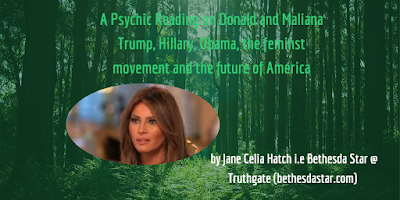 The first thing I see is curved horns which I think are devil horns, but then realize they are bull horns, and a massive frame, and realize it is Donald Trump.  He is angry and purposeful, like a bull in a fighting arena. He faces a huge sea of slithering movement in a dark pit.  I look closer.  It is bodies --maybe human-- slithering, writhing, sexual, attacking, predators.  My throat constricts and I feel nausea.  It is a mass of depravity.  I hear the words “ fall of Rome”.


This bull, Donald Trump, is singularly set to destroy this lowest level of human depravity.  He is the only person on earth who can do this,  I am being told.  He is directed, keen, extremely  intelligent-- but it is a body intelligence, like a bull--sensing, moving, pursuing, instinctual and deadly to his enemies.  Nothing can stop him and he is hated for this.

He is victorious as this first wave of depravity clashes with him.  It looks like a Lord of  the Rings battle (and the slithering beings look like Orcs).

I see people behind him (his supporters) who are strong, but nothing like him, but they are strong enough.  When the first clash of armies is completed, with the Bull victorious, many other smaller battles, carry on, throughout the country. This will end our country as we know it.  People divide up into groups.  It looks like The Constitution prevails and I have a sense of early America.

Once the many wars and battles subside, there is a blending. The left and right merge. Smaller battles (intellectual, political ,moral) continue on a minor level, but the worst depravity has been broken up. Leaders, less intent than Trump, are able to move in and negotiate and transform.

Ivanka will be a close adviser and she will bring him important insight once they dust has settled from this first wave (and help to temper him).

I see Melania.  I see mountains, snow-covered, a small village, lots of children and animals she played with as a child.  She is a pure soul. She has been hurt by this presidential election. The evil and rage she sees in America has crushed her optimism.

She is scared for her son, and also concerned for her husband because of all the threats against him.  What surfaced about his past has been painful for her, as she truthfully said she only knew him as a good man.  She draws strength from her childhood and her roots in Slovenia.  My message from my guides is to pray for her.  She did not want this life-- she has been dragged into it. Melania is stuck in the center of the hatred directed at Trump. Trump is a bull, it slides of of him. She is absorbing and feeling.

When she gets through this pain, she will be a strong person and she will speak her mind very strongly to him and he will listen (he respects her).  He loves her --the way a bull might love--instinctual.

She is very important to our nation, because she will advise him from her heart, but she has to care about America again.

Donald Trump is strong, he will succeed in tearing down the most hedonistic activities, but even for a bull --this will be wearing. He will never receive the recognition he deserves, but he will change America for forever.

The feminist movement is working against Donald Trump. They see him as negative, abusive male energy, so there is collective rage against him (in a sense he is taking the heat for five thousand years of repression by the patriarch)  making his life harder and this will have an effect on his ability to do this work.  They are distracting him. This will only antagonize him and he will ruthlessly react, as he does not want to be distracted and he has no respect for this group. The movement is important as it will help heal women of anger and prepare them for a new future.

I see the feminist group as swarms of angry bees--very inwardly focused.  I see them moving-- in black swarms.  He is watching their movement. Oh, I see the bees hitting a wall --many walls--and then dispersing,  breaking up into small components and falling to the ground and becoming grounded--seeded, if you will, and then the movement will become positive. I see groups of women, involved in helping their communities. The angry bees--become seeds of transformation in the new healthy soil. The Era of Women (equality between men and women and children) predicated by ancient people such as the Hopi, will arrive.

Bill Clinton is down. Hillary Clinton hangs onto a few threads of energy. Not sure where she is pulling it from (although I can guess)  as she has no inner light...she is simply as face...a human face...but no light..Her ethereal body still has a force, but her substance is gone. Bill will go very quickly.  His karma has caught up with him. She has protection, but then she will pass. Where she is going  is even worse than Bill.  My stomach knots, I look away.

Trump will bull his way through the environmental issues as his main goal goal is revitalizing the economy and the heart of America. He doesn’t care what he has to do to achieve his goal.  Everything is a red flag. He will charge. He will steamroll any groups that try to give him trouble. He seems to have unlimited power.

Obama is scared. He was a slave to the Clintons. He sold his soul. He didn’t want to do the things he did. I see him slumped over and gray, but an old man.

I see in the near future a revitalized economy which will give birth to new environmental solutions. American economic recovery will feed money into small groups who care about the earth. I see so much green (local, small) ,new housing, local greenhouses.  Artificial climate change initiatives like Harp will flounder, so our environment will thrive.

Trump dislikes the resistance at DAPL, but he respects the leader. Trump enjoys meeting strong leaders and he respects them (another bull).  I do see him him meeting with a leader in the Native American community.

In the end,  when Trump passes over, he will be a bull set free, I see him on a red rocky mesa running full steam across the mesas..that looks like Mars.

Melania is in the new America-- the  Age of (healed) Women, as the Hopi predicted, and she is the energetic forerunner to the future. President Trump was the bulldozer that cleared and cleansed the soil--  from which the new America will rise.
Posted by Jane Celia Hatch at 7:06 PM

You have seen so many things as I have,it's uncanny really.Each person you hit right,imo. One thing about Melania I see-Lioness ! At first I didn't support Donald's bid for the presidency ,but I wanted her to be our First Lady somehow. Crazy isn't it?
Two songs,telltale really,that he used. During his campaign'You can't always get what you want'. This is gonna be bumpy,like labor pains but like those pains,has a beautiful end. Also, he walked out,during the Inaugural concert to'Heart of Stone'. Telling isn't it?
Thank you for posting this.

Thank you for your comment. I just read it. Yes, and Melania recently came forward to encourage people to begin to use the earth and natural remedies for healing. I'm so excited. Yes, lioness. She is very strong and pure. A new kind of woman for a America--I think it has something to do with the ancient Goddess energy she brought from Europe! Thanks again for your comment.

I have seen the same vision